Humanitarian Aid as a Weapon of War in Syria

Francis, the Saint and the Pope: What’s in that Name for Us?

Whose Side Is God On?

The two-year-old conflict in Syria is now being played out in three different but interconnected arenas. There is the military conflict, which at the moment, from all indications is deadlocked. There is the media battle, which the opposition seems to be winning because of the considerable support of the US Government’s Bureau of Conflict and Stabilization Operations (CSO) to the Office of Syrian Opposition Support based in Istanbul. The newest arena is humanitarian aid, where the battle to win loyalty is just beginning. The humanitarian dimension has now emerged as a critical political issue as the regime and the opposition groups maneuver to provide basic services and humanitarian aid, which is at the core of the battle to win the loyalty of the local populations. All western militaries have this dimension, whether it is in the concept of the Three-Block War or other similar strategies, where a military unit is involved simultaneously in combat, providing humanitarian aid, and ensuring peace. While military logistics capacity is valuable in responding to natural disasters, when used in the context of war, it is highly manipulative and violates basic human rights. What is new is the emergence of this concept in a civil war, and the use of humanitarian aid by rebel groups and militias to win loyalty. Humanitarian aid is now a weapon of war in Syria. This is in gross violation of all international principles dealing with providing humanitarian assistance. 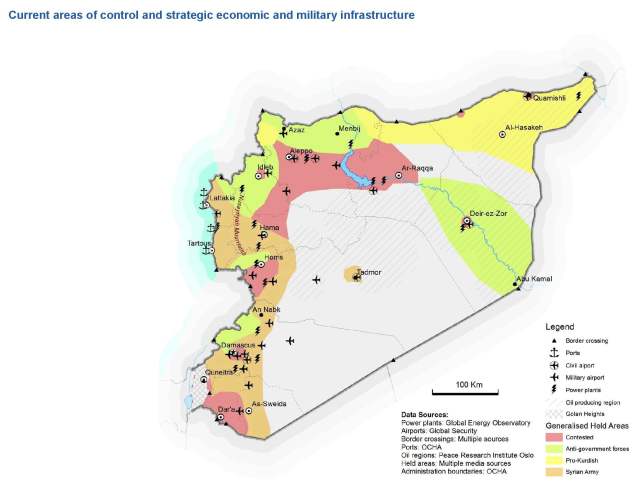 The recent Joint Rapid Assessment of Northern Syria indicates a downward spiral for all major indicators such as food, livelihood, shelter, heath, water and sanitation indicating a catastrophic humanitarian crisis.

A number of factors are affecting the delivery of aid into these areas. The first and most significant is increasing violence and criminality, often by militias of the various warring parties. Local agencies report that atleast a third of their supplies are lost in transit. Yet, the more disturbing reports are that both sides in the conflict are now using humanitarian aid as a weapon of war. There are reports that opposition militias often do not let the Syrian Arab Red Crescent (SARC) operate in many areas as they see the SARC as being a quasi government agency and thus perceived as pro-regime. Opposition groups also claim that the government is intentionally not allowing aid into opposition held areas.

The local relief providers who are trying to fill the aid gap, are small local communities that have organized themselves, elements of the Free Syrian Army (FSA), and extremist groups such as the Jabhat al Nusra and its allies. Though the FSA has established an Assistance Coordination Unit (ACU), there is no transparency or accountability of the funds that are provided through this mechanism.

The targeting of aid by the FSA, the Jabhat al Nusra (which has strong links with al-Qaeda in Iraq (AQI)) and other actors is based on ideology, ethnicity and religion. The local armed groups are blatantly biased with regards to whom they assist and whom they don’t. This is no different than the regime making it difficult for the UN and other INGOs to cross battle lines and provide assistance in opposition held areas. Their rationale is that war weary civilians will move to where aid is available.

Assisting the vulnerable and those in need is a fundamental Biblical value that is stated repeatedly throughout Scripture. Deuteronomy 10:19 states, “And you are to love those who are foreigners [the alien, the refugee, the migrant], for you yourselves were foreigners in Egypt.”  And Galatians 2:10, “All they asked was that we should continue to remember the poor…” The assistance was to be unconditional and there was to be no manipulation for any religious or political purpose. The community of faith responding unconditionally to those who are weak and in need demonstrates the reality of a compassionate God who knows physical pain and abandonment. Good Friday last week reminded us of this reality. Aid and assistance were never indeed to be weapons of war.

The Red Cross Code of Conduct clearly articulates the principles for humanitarian aid. 1) The humanitarian imperative comes first.  2) Aid is given regardless of the race, creed or nationality of the recipients and without adverse distinction of any kind. Aid priorities are calculated on the basis of need alone. 3) Aid agency shall endeavor not to act as instruments of government…policy. All parties in a conflict are under international legal obligation to allow the provision of humanitarian aid by a neutral and impartial third party.[1]

Yet none of the actors, whether they are the regime, the various opposition militias, or their international supporters are abiding by these principles and the international community remains silent as the civilian population continues to endure the horrific consequences of the struggle for power.

While many churches insides Syria are struggling against huge odds and acting on the Biblical mandate to provide assistance with no conditionality, much of the global Church seem disengaged and silent with regards to Syria and has lost its prophetic voice for compassion and justice in the midst of this conflict.