September 2021 Newsletter: A Compassionate Heart for the People

The Spiritual and Christian Life

A Compassionate Heart for the People

The Story of our Graduate Yamani

One day in 2016, Yamani left his house at 3pm with his wife and kids for what seemed to be a road trip. No one in Sudan except his brother and his friend knew that they would be fleeing to Egypt in a few hours. Not even his kids knew. The day before, Yamani had kept the luggage at his friend’s house so the kids would not find out. Everything had to be done in utter secrecy.
“I asked Hayat, my wife, to take the kids’ passports along with the money,” Yamani shared, “and if I were to be caught and left behind, that she and the kids would board the plane anyway.” But Yamani and his family made it safely to Egypt, and today, he has a wonderful ministry with Sudanese refugees. Recently, in an interview, Yamani shared with us about God’s work where he is.


How did your ministry take off in Egypt?

My ministry in Egypt started in 2016 as an extension to the ministry I had started in Sudan, Cush Returns to God. Its vision is to bring glory to God by seeing Sudanese in Egypt, Sudan, and other host countries return to God and be reconciled with Him through His son Jesus Christ. In Egypt, I began to think of ways I could reach out to Sudanese refugees. I began to meet the Sudanese pastors and ministry leaders, and I joined the First Baptist Church in Shobra. In that same year, I led a small workshop and invited around 17 church leaders. By the end of my workshop, two people had joined me, and with each month, more kept joining.


How did ministry with Darfuris start?

During my first year in Egypt, I met a number of Darfuris who live in Six October City, which lies an hour and a half away from Cairo. I would minister to them all day every Friday, and eventually, God started a home church there. We were seven people right then, but today, we have four discipleship groups, and those who have been in the faith long enough are now discipling new believers.
When I saw how miraculously God was working among Darfuris, I began to pray that God would raise up Church leaders from among them. Because many were travelling from Egypt to other countries, I worked hard to train leaders who can reach out to the Sudanese diaspora abroad. Several of them even returned to Sudan and are currently serving God faithfully there.
The ministry grew, and we began to hold three to four trainings a year for Sudanese ministry leaders coming from different denominations. More and more, a bigger number of church leaders began to realize the importance of mission work.


What is the status of Sudanese refugees in Egypt?

Generally, things are not bad. Refugees in Egypt are allowed to stay anywhere in the country rather than huddle together in one big refugee camp. Refugee kids struggle to get a proper education, however, because refugee schools are usually held in small residential apartments, and there aren’t enough teachers. Sometimes, they don’t have access to proper healthcare, either, since they earn very little, and they have no health insurance. But despite all this, those who come from war zones such as Darfur and the Nuba Mountains find life in Egypt much better.


Why are Sudanese refugees drawn to Christ?

The Darfuris I served with tell of how they suffered at the hands of religious extremists, but they also tell of Christian individuals and non-profit organizations who had stood by them when they needed it the most. While the atrocities of war led some to denounce God and religion altogether, many came to Christ because they had experienced His love through His people. Most of the Darfuri believers are college students with bright minds and a strong desire to know the truth. We answer their questions, start discussions, and pray with them.


What moves your heart while doing ministry? What keeps you going?

One of my favorite verses about Jesus is Matthew 9:36. It says, “But when He saw the multitudes, He was moved with compassion for them.” Twice, the gospel shows Jesus weeping. Once, He cried before the tomb of Lazarus, and another time, He wept while looking at Jerusalem. When I see the Sudanese people in their desolation and separation from God, I can’t but think of ways to serve them.
As a student speaker during my 2013 graduation ceremony, I remember speaking about how the disciples had asked Jesus to send the crowds away, but Jesus instead asked the disciples to give the people something to eat. I cannot feed all these people alone, but I can inspire a small number of leaders to inspire others in their communities and churches.


Do you feel that your passion has dwindled with time?

That is not the case at all! The fire in me burns brighter than ever. Sometimes I feel discouraged, but my passion for God and His ministry only grows stronger. One time, as I sat in our churchyard, quite tired and downcast, a young Darfuri woman appeared through the gate with three young men who had heard so much about Christ from her mother that they decided to become His disciples. We prayed together, and after our meeting, my mood was completely altered.


Is there a certain story that illustrates the change you see in the people you serve?

Once, during a trauma healing conference for Darfuri believers, the speaker began to call for forgiveness. Suddenly, an attendee stood up and, enraged, he cried out, “I can never forgive al-Bashir! I can never forgive the religious extremists who killed my family!” During the ongoing conflict in Western Sudan, a systematic genocide had taken place in Darfur. Some villages were completely annihilated. Many were burned alive in their own homes.
We helped the young man calm down, and we prayed together. Then, on the last day of the conference, he stood up again and said as he struggled to hold back his tears, “I have forgiven al-Bashir and the religious extremists who killed my family. All I want for them is to know Christ.”


How did the seminary training change you?

I had applied to ABTS hoping to become a good Bible teacher, but I ended up getting much more than that. I found myself gaining the skills needed to invest in people’s lives and to call for missional work, which was lacking in Sudan. Within me grew a concern for Sudan as a whole, and I eventually came up with a clear vision for ministry called Cush Returns to God. I am thankful for ABTS President Elie Haddad with whom I met several times as I worked on my vision. I remember sitting in his office as he wrote on his whiteboard, and we brainstormed together. 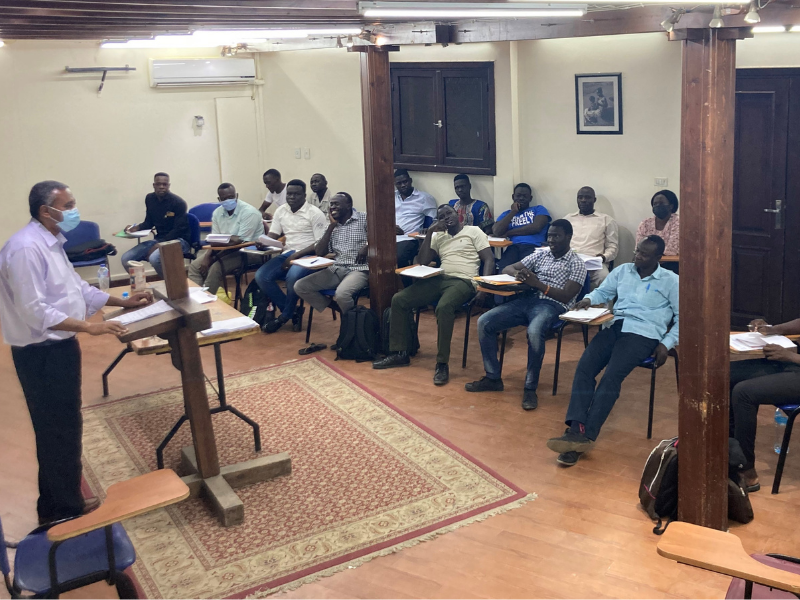 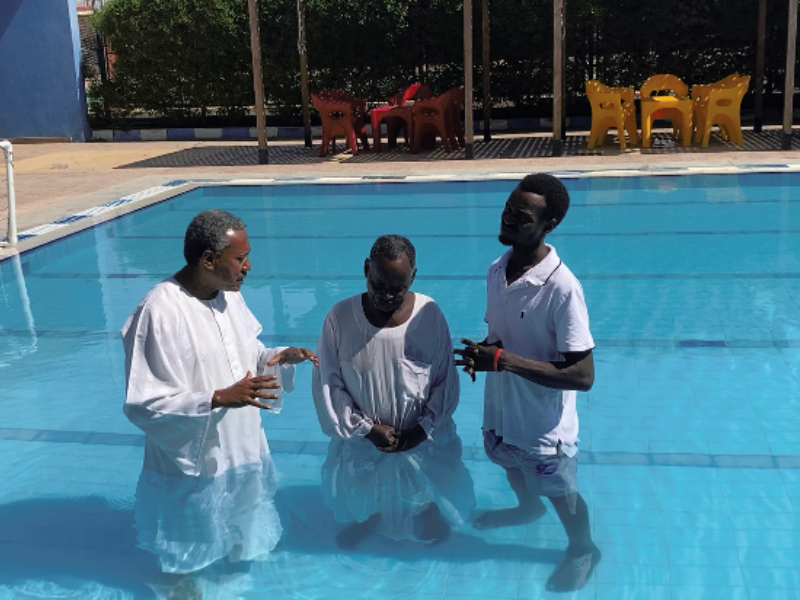 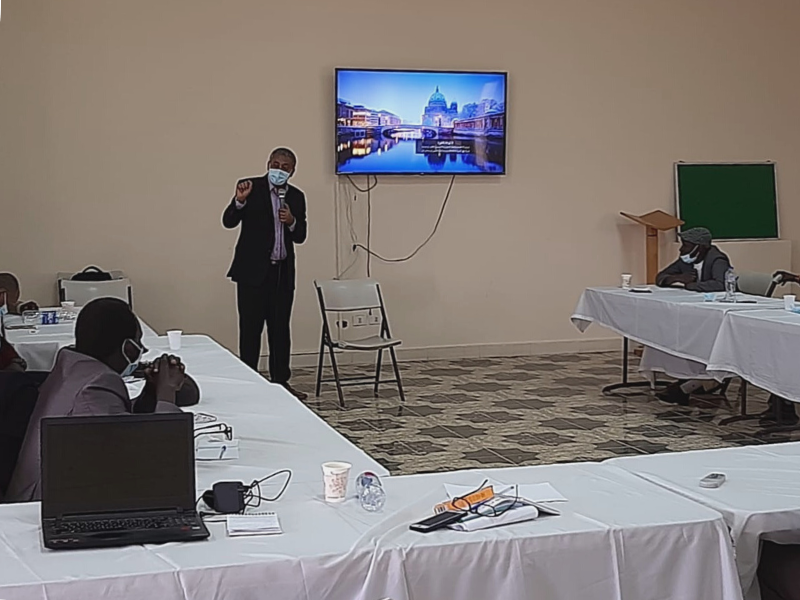 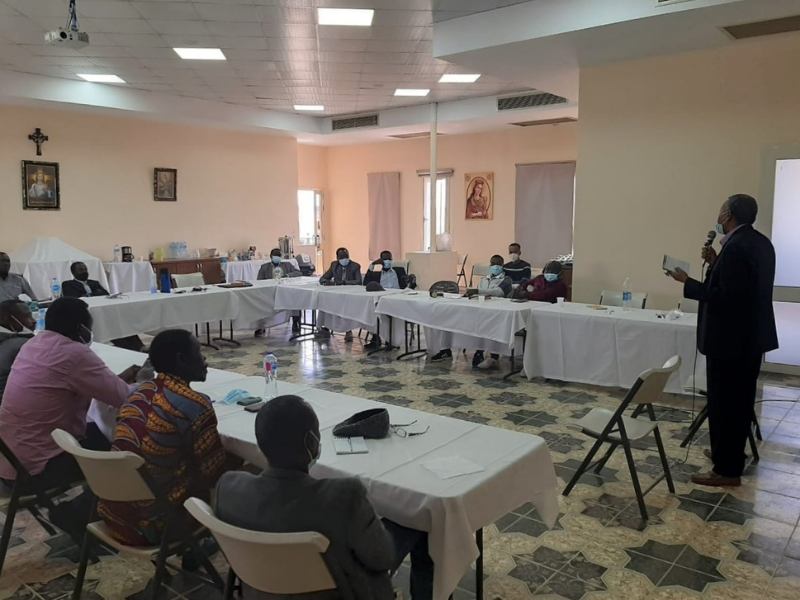 What are your hopes for ministry?

The hopes are many and often bigger than I am. I dream of starting a discipleship school for Sudanese people that runs for three to four months yearly. I dream of starting a radio station that spreads God’s word in the Sudanese dialect exclusively. Currently, I am working on translating the Bible, along with a team, to the spoken Sudanese dialect. It will be in the form of an audio app, and we will distribute it in hard-to-access places. The Bible says in 1 Corinthians 15:58 “Always give yourselves fully to the work of the Lord, because you know that your labor in the Lord is not in vain.”
We are encouraged that many Darfuris are seeking Christ and boldly speaking of His love. We stand amazed at God’s changing work, and we pray for our graduates who, like Yamani, are allowing the Holy Spirit to work through them.
Read our September 2021 Newsletter
Subscribe to our monthly newsletter